From 9 to 5, Serena Kerrigan is a producer and host for Refinery29. But both on and off the clock, she’s SFK. (The “F” stands for a bold, in-your-face expletive.) You can think of SFK as Beyonce’s Sasha Fierce. She’s “larger than life, extra, and unapologetically herself,” qualities that have culminated into yet another moniker and career trajectory: Queen of Confidence.

In her R29 YouTube series, “Ask Serena,” SFK uses her unabashed humor and positivity to empower young women to be confident and courageous. To celebrate the series launch, we asked her about all things confidence, workouts, and wellness.

how did you become the “Queen of Confidence”?

It took me a while to figure out who SFK truly was. She didn’t fall into a certain niche, and my Instagram felt like a portfolio of thirst traps. Since people told me my social media didn’t accurately represent who I was, I tried painting a better picture of what I wished to embody. From there, I realized I wanted SFK to be the epitome of confidence.

Gaining confidence takes time, and you have to work at it as you would with anything else. I projected an image of confidence out into the world when I didn’t have it. Eventually, it became real.

The more I thought of myself as beautiful, powerful, and strong, the more I began to believe it. It’s like playing a trick with your mind. And trust me, it works.

What inspired you to kickstart your wellness regimen?

I went to Israel last year and ate so much hummus that I gained 10 pounds in 10 days. I was way over my normal weight and wallowed in self-pity, but didn’t really do anything about it.

My mom told me I was just making excuses—that if I really wanted to make a change, I had the power to do so. She, as always, was right.

So one day I just decided to commit. I didn’t want to do a bootcamp or a fad diet. I wanted to make lifestyle changes that would seamlessly fit into my life.

what’s the secret to your success with it?

When I got results, so many people messaged me on Instagram asking for my secret. The secret is consistently doing the work.

I wake up really early and work out at least four times a week. I pack my own lunches and try to limit indulging to the weekend. Yes, sometimes I sleep in and yes, sometimes I eat a whole pint of ice cream—but for the most part, I have a routine and stick to it.

There’s no quick fix or easy solution in life. If you want something badly enough, you’ll do whatever you can to make it happen.

How has your new routine impacted other AREAS of your life?

My entire fitness journey has been life-changing, but not just because of the physical results (although I do look hot!). The best takeaway was feeling empowered to show my vulnerability.

I started to record videos at the gym half asleep, dripping in sweat without any makeup, lifting weights. It was like a peek behind the curtain at an unpolished version of myself.

It was a huge turning point because I realized that showing this vulnerability wasn’t scary at all. If anything, it actually helped me build an even bigger following because it shows that I’m real. I’m not a supermodel or an athlete. I’m just a 25-year-old curvy girl putting in the work while I juggle my full-time job and crazy social life.

If I can do it, anyone can. 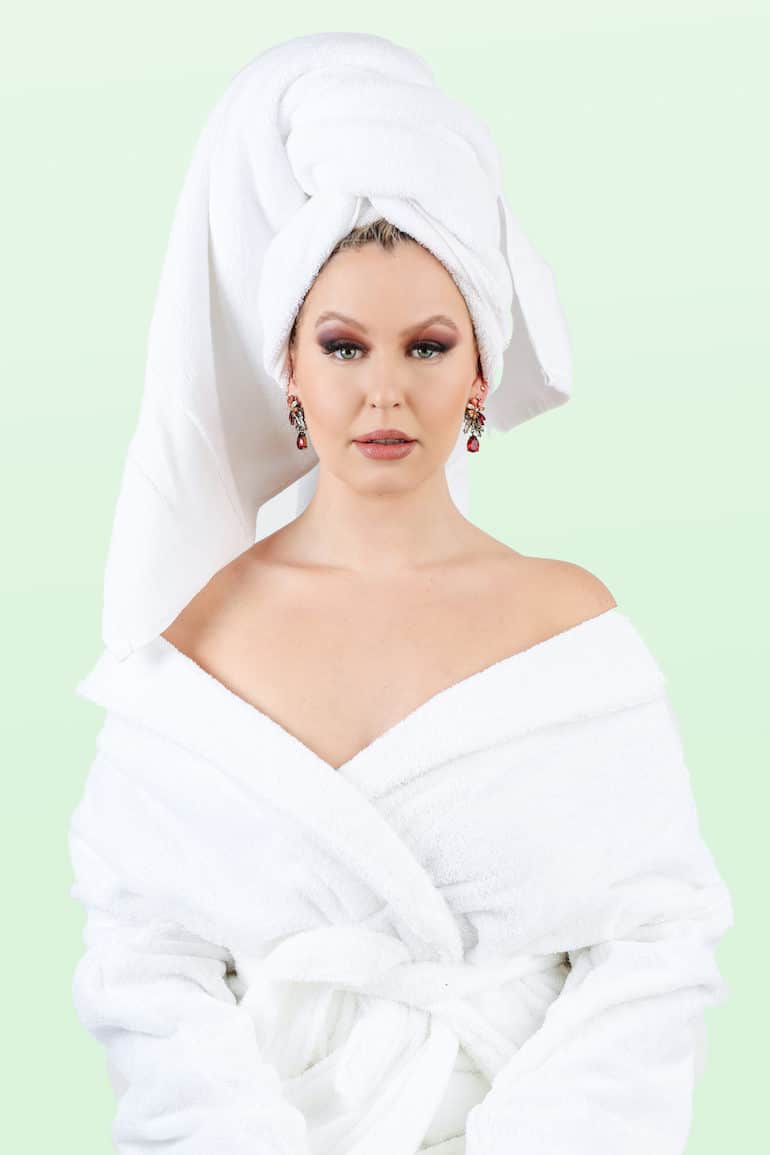 What are your holy grail beauty and wellness picks?

I swear by Giorgio Armani Luminous Silk Foundation and Hourglass Unreal Lip Gloss in Canvas. And obviously the Queen of Confidence needs a highlighter that shines like the top of the Chrysler Building; Becca Champagne Pop does just that.

In terms of wellness, I take HUM’s Ripped Rooster to supplement my workouts and Red Carpet to glow. And once a week, I go to an infrared sauna at Higher Dose to sweat everything out. I usually bring a book or just sit still and contemplate life. It’s a great way for me to disconnect.

I’ve also been going to therapy consistently since I was seven years old. I’m a huge advocate of prioritizing mental health, and believe everyone should try therapy at least once. We all can improve and should want to be and do better.

What’s your advice for when women feel down on themselves?

First and foremost, be gentle on yourself! I also think it’s important to surround yourself with people who lift you up, who’ll tell you how beautiful or smart you are when you need a boost.

Additionally, I’m a big believer in manifestation. You alone are in control of your confidence and happiness. If something really bothers you, what can you do to change it? You have way more power than you think.

The first steps are acknowledging your strengths and speaking positively about yourself. If you won’t, why would anyone else?

What’s the best way to boost your mood, Queen of Confidence-style?

Put on something that makes you feel sexy (or nothing at all), throw on some lip gloss, play “Run the World (Girls)” by Beyonce, and dance in front of the mirror.

Also, pushing yourself mentally and physically through exercise works wonders.

What’s the most influential advice you’ve ever been given?

“No one will love you until you love yourself.”

Last year a co-worker asked me, “If you could have a YouTube series about anything, what would it be?” My answer was “confidence”—but how could I translate that into a digital series?

I thought about the Q&A feature on Instagram, which has become a staple of my brand. Women ask me tons of questions related to confidence and I respond immediately. But what about IRL? Now that I feel empowered, I want to devote my life to empowering others.

That’s what “Ask Serena” is. It’s a way for me to help women realize they’re in control of their narrative and self-perception, and shouldn’t care about what others think.

Where do you see SFK in the future?

My goal for this year was to develop and produce my first YouTube series. Next year, I hope I’ll have produced another season (fingers crossed!).

Going forward, I hope to amplify my message as much as possible. I’m currently researching life coaching programs so I can get a certificate. If I’m the Queen of Confidence, then I really need to know my stuff, right?

I used to think of of myself as the next Chelsea Handler, so I’d love to host a late-night talk show. I also want to be the best dressed at the Met Gala. Land a campaign with Chanel. And buy my parents a house in the Hamptons. You know, the usual.