SHOP Take The Hum Quiz
But would we recommend it? This low-carb, high-fat diet is said to be a favorite of celebrities like Halle Berry, Kourtney Kardashian, and Vanessa Hudgens. After reading all the hype, we decided to try the keto diet for ourselves. Watch the video above to see how it went down, or read all about it in the interview questions below.

What interests you about the keto diet?

Sarah: There’s so much hype about it! I wanted to see how it actually feels and what the experience is like. As a dietitian, I think it’s important to not only have a science-based understanding of how things impact the body, but also to go through the experience of a diet. Zena: Low-carb sounds VERY unappealing to me. But Vinny Guadagnino looked great on the reboot of Jersey Shore, so that made me curious about the weight-loss benefits. On a more intellectual level, I also watched The Magic Pill documentary on Netflix and read Gary Taube’s This Is Why We Get Fat. Both had really interesting health arguments for incorporating more fat and less carbs into your diet. Vanessa: Well, everyone else is doing it, so I didn’t want to feel left out.

What was the most challenging part?

Sarah: It was really hard to shift my mentality around the way I was eating. I’m used to eating larger volumes of food because I incorporate so many vegetables into my diet. While I didn’t necessarily feel hungry on the keto diet, I did feel like I was thinking about food a lot more than I normally do. I also have a pretty bad sweet tooth, which I can usually manage with occasional sweets. But not being able to eat anything sweet made me focus on it more than I wanted to. Overall, I’d say I felt a little imbalanced with what I was eating. Also, eating so much fat on a daily basis got really gross, really quickly. Zena: Tracking everything! On the keto diet you want to eat 20 net carbs a day or less. However, you also want to hit the right percentages of fat to protein to carbs. I used the Carb Manager app on my phone. The app made it much easier, but that’s still a lot of numbers to be managing everyday. Vanessa: I had a hard time sticking to this diet because I don’t usually eat a lot of meat or dairy. Also, it’s difficult to find plant-based proteins that aren’t carb heavy. In addition, just eating so much fat at every meal is hard! Ultimately, I wasn’t as strict about sticking to the diet, but I did avoid grains for the whole month which was impressive for me.

Did anything surprise you about the keto diet?

Sarah: My energy and hunger levels really surprised me. I didn’t feel like I was eating a lot, but it did keep me full. My hunger shifted from being more emotional-based (like getting hangry) to being more consistent. When I was hungry, I was hungry. It didn’t come with any emotion attached to it. I was also shocked at my ability to work out while going on such a low-carb diet. I did all of my normal workouts. Not only was I able to do them, but I felt consistently fueled. Zena: It was surprisingly indulgent! I thought I’d feel annoyed and deprived all month because you can’t have bread, sugar, or even fruit, really. But all the fat is very satisfying and makes for some tasty meals. Plus, you can actually drink hard alcohol on the keto diet as long as you don’t mix with sugary mixers. I was still able to have a drink on the weekends when I went out with friends. An unexpected perk was that I also slept really well the whole month. Vanessa: I was surprised how hard it is to keep track of all the carbs, protein, and fat and to try and get the right balance between these.

What was the best part about the keto diet?

Sarah: Breaking it! Just kidding… kind of. I did enjoy not having to eat as much food and not feeling like my hunger controlled me. Even though mentally I thought a lot about the foods I wanted to eat, my hunger and satiety were much more balanced on the keto diet. Zena: Rediscovering my love of bacon. Vanessa: Trying new recipes. It was nice to get out of my usual routine and cook new dishes. I made keto lemon bars, which were a hit at the office.

What were your results after 30 days?

Sarah: After 30 days, my body fat percentage went down slightly. It’s crazy because I was probably eating what felt like a stick of butter a day! Nothing else shifted that much overall. 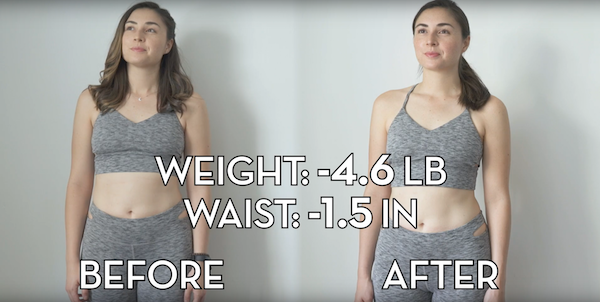 Zena: I stuck to this diet pretty strictly for the whole month, and also took Ripped Rooster to help my body burn fat more efficiently. I lost five pounds in the first week, which I assumed was all water weight but it stayed off for the whole month. I also lost 1.5 inches off my waist, which was great!

Vanessa: I lost a pound. Nothing crazy.

Would you try the keto diet again?

Sarah: I would cycle on and off this diet for two weeks at a time. I think any extreme type of diet isn’t sustainable for most people. I learned some concepts from the keto diet that I’ll continue to incorporate, like focusing on high-quality fat at each meal. I’ll still snack on a lot of the keto-friendly things because it helps keep my hunger at bay for much longer. Zena: I’m curious about the results possible after 60 or 90 days, but I also was ready for more freedom and flexibility in my diet after the 30 days were over. I don’t think I’d do the full keto diet again since it takes so much effort and limits the variety of things you’re able to eat. But I’ll continue to incorporate more healthy fats and fewer carbohydrates in general. Vanessa: My first original answer was no way! But I’ve since read Dr. Will Cole’s Ketotarian and want to give that a try since it fits in more with my preferred diet. My Results After 30 Days on a Whole-Foods, Plant-Based Diet