SHOP Take The Hum Quiz
As a recent 20-something who just turned 30, I know a thing or two about consuming alcohol. I’ve spent the better part of my 20s living the good life in LA. That’s consisted of bottomless brunches, happy hours, and awkward Bumble dates that take you from one to three cocktails real quick. My point? All that casual drinking is fun, but at the mature age of 30, you start thinking about the long-term effects of alcohol on your health.

Long-term effects of alcohol on your Body

I don’t have to tell you that excessive drinking can lead to mood swings, a bad night’s sleep, poor life choices (I swear that selfie I sent my ex looked way cuter yesterday, half a bottle in) and other less-than-desirable circumstances. (For the record, the US Department of Health and Human Services defines excessive drinking as four-plus drinks for women and five-plus for men consumed in one occasion.) But if you plan to keep up the habit for the foreseeable future, there are a few things you should know for the long run.

According to findings in the British Medical Journal, those who reported higher levels of drinking often had a shrunken hippocampus, which is associated with long-term memory. Essentially, excessive drinking isn’t just influencing you to make impulsive, less-than-stellar life choices. It’s actually making you dumber. Hard pass, thank you very much.

We all know that a drink here and there can quell nerves. Let’s be real: Anyone who’s ever whipped up a pre-date cocktail knows what I mean. But according to a Mental Health Foundation study, consuming alcohol numbs our emotions. It also depresses the central nervous system, leading to mood fluctuations. That’s all good intel, but what does that mean, say, 10 years from now? The same study reports that repetitive alcohol consumption will actually change your brain chemistry for the worse. Simply put, alcohol decreases serotonin levels, which in turn makes you feel depressed over time.

Have you ever been hours deep into a weekend brunch-turned-happy hour, and suddenly noticed you’ve barely eaten all day? Multiply this behavior times a week/month/year, and chances are your overall nutrition isn’t great. It’s no surprise that such malnutrition can lead to a weakened immune system, making it harder to fight off infections. Even worse? According to a study from the National Institute on Alcohol Abuse and Alcoholism, it could increase your risk of developing certain cancers.

Alcohol-related malnourishment can negatively transition to the beauty department. For instance, New York nutritionist Jairo Rodriguez shared with Vogue, “Alcohol is actually one of the worst, most aggressive compounds to destroy your skin.” Trust: If you’re drinking heavily, nutritional deficiencies can quickly materialize as dark circles, premature wrinkles, acne, hair loss, and other not-so-glam complications. 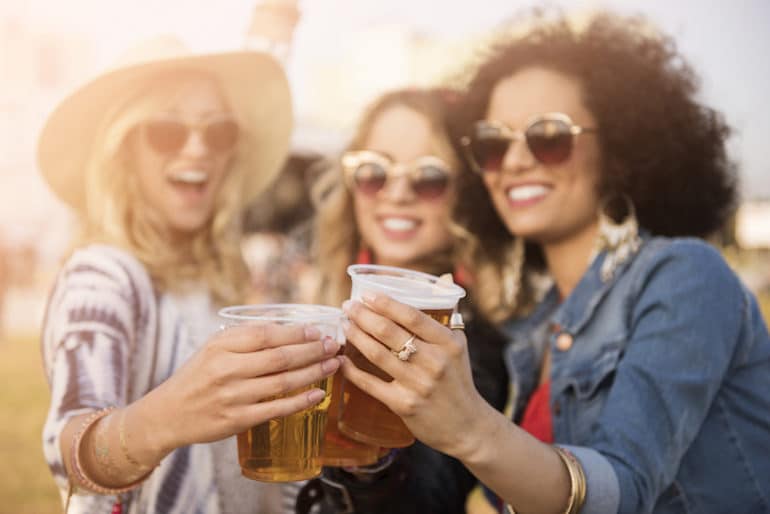 As if a dull memory, slipping beauty standards, and an increased risk of cancer aren’t enough to encourage you to curb your habit, think of your liver. We know that drinking is hard on this crucial organ, but how so? To dive a little deeper, I consulted the American Liver Foundation to understand three types of liver disease to which drinkers are susceptible. First, true to its name, fatty liver is basically just a buildup of fatty cells in the liver. It’s pretty common and there usually aren’t any symptoms. More serious is alcoholic hepatitis, which is only reversible sometimes. Symptoms flare up if you binge drink. It also gets worse over time, and could actually be deadly. Finally, the most catastrophic form of liver disease is alcohol-related cirrhosis, which usually occurs after hitting the bottle for 10+ years. Here, non-living scar tissue replaces normal liver tissue, which eventually overwhelms the majority of the organ. It’s often life-threatening and very likely to be irreversible.

So what can you do to avoid the scary long-term effects of alcohol? The easiest solution is to drink less. Don’t consume more than four drinks in one sitting, and limit imbibing to once or twice weekly. You should also drink water in between each adult beverage. Next, don’t drink when you’re feeling low. Instead, go for a run or do something active. If you feel like your energy levels are depleted or your nutrition needs a boost, there are tons of great vitamins and supplements you can add to your routine. In fact, HUM’s Wing Man is a perfect pick to keep your liver in tip-top shape. I’m not saying don’t live your life—just think before you drink. So, that leads me to my next pressing question: What do responsible 30-year-olds even do for fun?