Here to give you the definitive guide to the best and worst sweeteners is HUM Nutritionist Jessica Bippen, MS, RD.

The USDA estimates that the average American consumes over seven tablespoons of added sugars per day. This excessive sugar intake links to higher calorie consumption and lower diet quality. In turn, this leads to an increased risk of weight gain and other more serious medical conditions.

But even with these facts, most of us aren’t going to cut it out of our lives completely. As a result, people are now at least looking for healthier alternatives. So it’s no surprise that companies are jumping on the opportunity by providing plenty of options. But are any of these sugar substitutes actually healthy?

What are the best and worst sweeteners?

Dates, honey maple syrup, and coconut sugar are your best sugar alternatives. The occasional use of stevia and monk fruit are also good options. The worst sweeteners include artificial sweeteners like sucralose, saccharin and aspartame, high fructose corn syrup, agave, and brown rice syrup. It’s best to avoid these sweeteners, if possible.

Let’s see just how these sweeteners rank in detail. 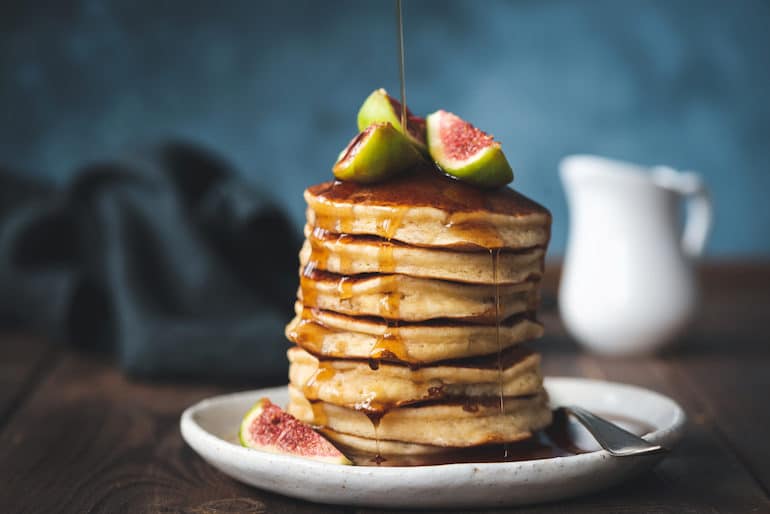 This thick, sweet golden liquid is made by bees from flowering plants. Honey is one of the best alternatives to refined sugar. While it’s comprised of mostly glucose and fructose molecules, raw, unpasteurized honey contains trace amounts of B vitamins and minerals like iron, manganese, and potassium.

The biggest health benefit of raw, unpasteurized honey comes from its antioxidant and antimicrobial properties. Honey also tastes slightly sweeter than regular sugar, meaning you can use less while still achieving the same sweet taste.

Maple is a sticky syrup that comes from boiling down the sap from maple trees. It ranges in colors from golden to amber based on the time of the season the sap was extracted from the maple trees. Maple syrup is a great alternative sweetener thanks to its antioxidants and trace amount of nutrients like manganese and zinc.

These soft and chewy fruits are nature’s candy! Dates are a good source of fiber, potassium, calcium, and antioxidants. A 2009 study of 12 different sweeteners found that date sugar has the highest antioxidant content. This nutrient profile makes whole dates a great option to satisfy a sweet tooth.

Dates also make a terrific alternative for refined sugar in sauces and desserts. You can easily blend whole dates into a batter or liquid. Companies make this process even easier by selling date paste, date syrup, and date sugar (which is made from dehydrated and ground dates). Since these options still have the same nutrients found in whole dates it makes for a very healthy sugar alternative.

This trendy tropical sweetener is made from broiling down and dehydrating the sap of coconut palm flowers. While it goes through processing, it’s less refined than regular refined sugar. Coconut sugar also has a lower glycemic index than table sugar. Furthermore, it contains trace amounts of minerals and naturally occurring inulin, which acts as a fiber. Since coconut sugar can replace brown sugar at a one-to-one ratio in recipes, it’s easy to use in baking to make your treats slightly healthier.

In 2008, stevia won FDA approval for use as a safe sweetener for foods and drinks. Stevia comes as a powder or liquid via the stevia plant, which is native to South America. Stevia is actually about 100-to-300 times sweeter than sugar. It contains no calories and doesn’t impact blood sugar like refined white sugar. This means you can use much less of it or combine it with other sweeteners to reduce calories. Keeping that in mind, stevia can have a distinct, slightly metallic taste, which can be off-putting to some.

Also known as Luo Han Guo, monk fruit is gaining popularity as a non-caloric, natural sweetener. Monk fruit extract comes from a sweet melon grown in Southeast Asia and is used as a traditional herbal remedy in China for coughing and sore throats, as a longevity aid, and as a sweetener.

Like stevia, monk fruit is about 200 times sweeter than table sugar. One benefit of monk fruit is it lacks the bitter aftertaste associated with stevia. This makes it more appealing for many consumers looking for a low-calorie option that won’t spike blood sugar.

Preliminary research also shows that monk fruit contains antioxidants that in turn could support the immune system, digestive tract, and respiratory system. In terms of safety, The FDA has also declared monk fruit extract as safe. 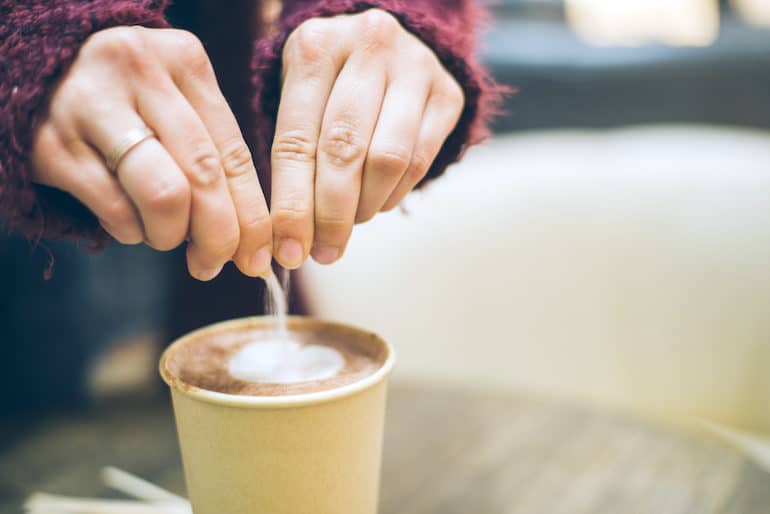 Brown rice syrup is a popular option among the anti-fructose crowd and vegans as a replacement for honey. It’s made from brown rice treated with enzymes to break down the starches. The result is a thick, golden liquid that is slightly less sweet than sugar. Brown rice syrup is low in fructose, meaning there is less stress placed on the liver.

The one downside of this sweetener is that it comes from brown rice, which may contain high levels of arsenic. Because brown rice can efficiently absorb arsenic from the surrounding environment, it’s best to avoid this sweetener if you’re watching your heavy metal intake.

Many people deem this recently popular sweetener as healthy, but it’s not exactly the case. Agave syrup is made from the agave plant, which is also used to make tequila. However, agave is more processed than people realize. First, the process begins with extracting and filtering the agave juice. Then, it’s heated and hydrolyzed into syrup. In fact, this process is very similar to manufacturing high-fructose corn syrup.

Proponents of agave touted it for its low-glycemic index. It also has a trace amount of minerals like iron, calcium, potassium, and magnesium, as well as a neutral taste. Agave is one-and-a-half times sweeter than sugar, so you don’t need to use as much to achieve the same level of sweetness.

Still, despite these slight advantages, it also contains one-and-a-half times more calories than refined white sugar and much more fructose. While most sweeteners have a roughly 50/50 mix of glucose to fructose, agave is actually 90 percent fructose! This is important because consuming too much fructose may increase the risk of abdominal fat and numerous health problems.

Initially, researchers thought agave was a good option because fructose doesn’t spike blood sugar. However, the liver metabolizes fructose, and when it receives excessive amounts, it transforms it into triglycerides. This type of fat can increase the risk of numerous health problems, including fatty liver disease and weight gain.

Manufacturers add this cheap sweetener into nearly everything. Next time you’re at the grocery store, look at the mainstream barbecue sauces or peanut butter. You’ll surely find a few with high-fructose corn syrup as an ingredient.

The worst sweeteners are artificial sweeteners, such as sucralose, saccharin, and aspartame. These sweeteners are manufactured in a lab, meaning they’re not found in nature. While research considers them “generally regarded as safe,” inconclusive research shows evidence suggesting they’re not a healthy option and can even promote weight gain in the long run.

Sucralose, aka Splenda, is 600 times sweeter than table sugar. It’s marketed as a “no-calorie” option since it meets the FDA standards of less than five calories per serving.

Saccharin, commonly known as Sweet ‘N Low, is about 300 to 500 times sweeter than table sugar. The biggest drawback is an unpleasant aftertaste. Back in the 1970s, the FDA proposed saccharin be taken off the market after citing studies that linked the consumption of the sweetener with cancer in lab animals. However, the proposal failed with the no conclusive that it causes cancer in humans.

Aspartame, also known as NutraSweet or Equal, is one of the most popular sweeteners. Two amino acids compose aspartame, phenylalanine, and aspartate. Unlike other artificial sweeteners, aspartame contains four calories per gram in the form of amino acids. However, it’s 200 times sweeter than table sugar, so you can use significantly less. Like with the other artificial sweeteners, the FDA regards aspartame as safe to consume in the amounts that people typically eat or drink. However, many researchers and health professionals aren’t convinced.

What about refined cane sugar?

That being said, there are worse sweeteners than refined sugar. When you have the option, choosing one of the less refined options like honey, maple syrup, and dates is a better choice. However, it can be more challenging to use some of the healthier options without changing the taste and texture of the food you’re trying to make.

If you’re going for a classic taste and texture, try reducing the amount of sugar in the recipe. Often, you can get away with cutting the sugar by a third without noticing much of a difference. Then, if reducing the amount of sugar in the total recipe isn’t possible, you can always reduce the portion size per serving. Make cookies smaller or perhaps just make half a batch. This way, you’re consuming less sugar in general.

When it comes down to it, sugar (natural or refined) is still sugar. My best advice is to reduce your sugar consumption in general. The less sugar or alternative sweeteners you use, the better it is for your overall health.

All this being said, it’s important to not fear foods. Treating yourself to ice cream on occasion or your grandma’s apple pie isn’t going to derail your health. After all, part of overall health is enjoyment! It’s best to avoid the top-ranked worst sugars in your daily diet, but if you happen to have a warm, fresh-out-of-the-oven chocolate chip cookie made with refined white sugar once in a while, don’t sweat it!

Interested in cutting sweeteners completely? Two brave HUM employees tried removing all of the sweeteners above for thirty days. See the results of our no sugar and sweetener challenge here.

Jessica Bippen, MS, RD, is a registered dietitian nutritionist. She received her Master's in Medical Nutrition Therapy and Bachelor of Science in Dietetics and Clinical Nutrition Services from Saint Louis University. She lives in St. Louis, Missouri and believes in a holistic approach to health and wellness.