Maybe mirror mantras aren’t your thing—and that’s totally cool. Not everyone feels comfortable making eye contact with themselves while repeating affirmations predicting health, wealth, and happiness, let alone believing those positive things are surely heading their way just because the vibe is out there. But the truth is, words embody power. And most self-talk tends to skew towards the negative, according to clinical psychologist Ben Martin.

Words carry weight. Not physical weight, not density, though sometimes it can feel that way when someone puts you down or the rumor mill circles back to you. Words also carry energy, and they can be incredibly effective in how you condition yourself. So, whether or not you’re “there yet” with  ultra-positive self-talk, it’s time to stop negative self-talk, stat.

It’s a Form of Conditioning

In a way, you could say that self-talk is a way in which we program ourselves. A way of thinking about it is called Neuro-Linguistic Programming, which is essentially how the brain processes the language we use to define how we interact with ourselves, situations, and others. Simply put, it’s a strong indicator of how real the mind-body connection is. When we repeat negative self-talk, it accumulates into how we condition ourselves to behave.

SIDE EFFECTS of NEGATIVE Self-Talk

It can be physical. Think about when you step out of the shower and glance at yourself in the steamy mirror. Are your daily thoughts disappointment or disgust, presented via insulting adjectives you would never dream of flinging at another person? If so, you’re essentially programming yourself to truly believe you’re the monster you exaggerate yourself to be.

Self-talk is also performative. Do you berate yourself with derogatory self-assessments every time you make a mistake? You’re then creating an image of an ignorant person not just inwardly, but outwardly as well.

Sometimes this form of dialogue manifests as sarcasm. We often use self-deprecation as a form of humor to fashion ourselves as relatable, likable, and humble. But too often, we default into this mode and overdo it. It can grow to become the dominating side of our personality to our peers, which can be off-putting and self-defeating. Some psychologists argue that a “self‐deprecatory ‘tendency to denigrate’ or ‘disparage’ oneself” can even be associated with depression and anxiety. 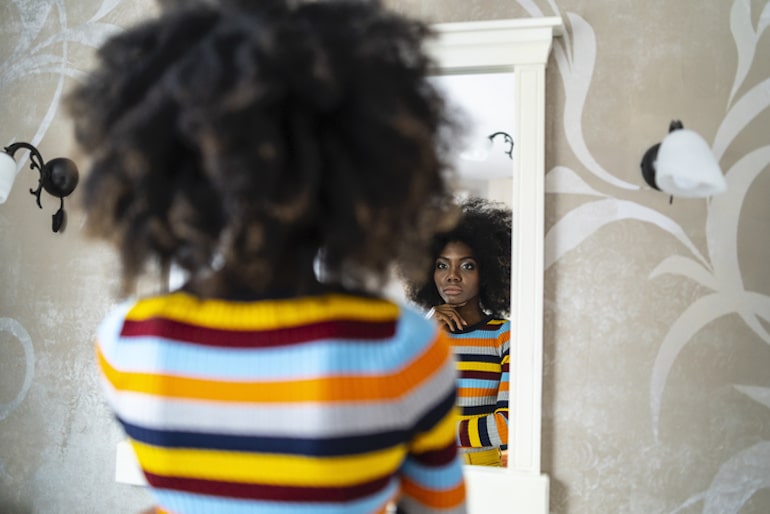 How To STop Negative Self-Talk

Our bodies and body language respond to what we say, even inside our minds. While this influence might seem dangerous or intimidating, it shouldn’t. It just means we wield the power to shift it just as easily.

But as simple as it sounds to say something nicer to or about yourself, long-standing patterns are not so easy to quit. Breaking the cycle takes dedication and constant awareness. Luckily, there are a few ways to dethrone your inner negativity from its power, which Ben Martin, PsyD, defines as challenging your self-talk.

The first step to effectively stop negative self-talk is to recognize your inner critic. Do you often use extremes when talking to yourself, or about yourself to others? If you find yourself scowling, using extreme words and absolutes (e.g., always, never, everyone, nobody), it’s time to quit. First, such proclamations are almost never accurate. And second, they set yourself up for failure in the future because it’s difficult to part ways from your staunch predictions.

Speaking of predictions, negative forecasting—or what life coach Jack Canfield calls catastrophic predicting—is another form of harmful self-talk. Always assuming the worst is usually a form of protection from disappointment, but in reality, actually leaves us in a consistent state of disappointment.

Get out of constant worst-case-scenario thinking and start planning for things to go well. They won’t always, of course. But positive energy can accumulate to manifest more good than bad, so much so that you’ll start to expect it. Read: Don’t be surprised when good things happen.

Finally, unpack your bags; we’re not going on that guilt trip. So much negative self-talk is systemic, meaning you’re holding onto baggage from previous mistakes and ruminating on them, assuming that no one has ever forgotten them, and that people you haven’t met yet will probably think the worst of you. Stop hopping on that train to Regretsville and be present. Focus on what you’re doing right now—not what you can’t change in the past, or what could go wrong in the future.

One final tip: Show yourself the love you’d give to a friend. After all, you’d never let someone talk to your BFF the way you let your inner critic treat you sometimes.

Nicole Lesmeister is a writer and editor living in Los Angeles, CA. She also contributes to Poosh and Byrdie. Nicole loves cooking nourishing meals with simple ingredients and is equally fascinated by ancient wellness practices and new scientific discoveries.