When Laughing Frog, one of my favorite yoga studios in Los Angeles, sends out a newsletter asking whether students would be interested in taking a goat yoga class, it takes me all of 15 seconds to hit reply and send a resounding YES. Apparently, I’m not the only one.

Goat yoga has quickly become a viral sensation in the yoga scene with sold out classes across the country.

What IS Goat YOga?

Goat yoga is a group yoga class with the addition of live baby goats who are guided by their trainers to interact with students in specific poses. The classes at Laughing Frog, for instance, are run in partnership with Party Goats LA. In the classes, two adorable baby goats named Spanky and Pippin accompany two trainers. A yoga instructor teaches the class just as she normally would, except the baby goats have free rein to come and climb on top of you in your practice. 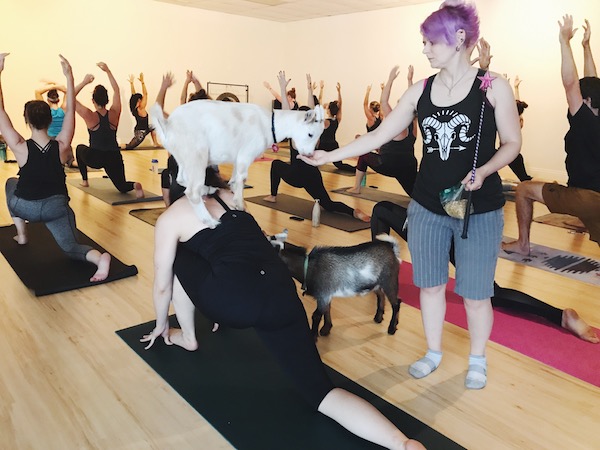 “Spanky and Pippin are trained to jump on people during key yoga poses such as plank, down dog, upward dog, child’s pose, boat pose, bridge, and wheel. They’ll also go under your legs during warrior and other standing poses,” says trainer Scout Raskin.

Indeed, the trainers guide the baby goats with feed, and also stop them from occasionally munching on a ponytail. (Trainers also take responsibility for cleaning up any accidents. But be warned: There’s no guarantee a goat won’t do its business while on top of your back.)

We first witnessed goat yoga as early as February 2016. Insta-yogi Rachel Brathen shared videos of her baby goat climbing over her back during her home practice. Shortly after, a farm in Oregon starts offering goat yoga classes. Then, a farm in New Hampshire. News outlets were quick to catch on and it’s since become a worldwide with sensation with international offerings.

So, what (if any) are the benefits to goat yoga?

Admittedly, this isn’t the most physically intensive workout I’ve partaken in. Although the 25-pound goats can add a little extra resistance to your planks, they have a lot of people to circulate through in the sold-out classes so they don’t exactly linger for a long hold. Still, you are at least getting the standard physical benefits of a gentle yoga class.

With that said, it’s hard to not giggle at goat yoga.

“Let’s face it: The whole idea of goat yoga is a little absurd, but don’t discount it as a novelty. The goats force you to be light-hearted and not take every little thing so seriously,” says yoga instructor Jodi Michaels from Laughing Frog.

“It’s not a traditional yoga experience, but it’s one that’ll definitely put you in a good mood,” agrees Scout from Party Goats LA.

And there is certainly something to these endorsements. A recent study on laughter yoga shows significantly higher mood and happiness as immediate side effects, plus decreased blood pressure with regular practice. Another study on laughter therapy shows a positive effect on the immune system. Laughter reverses the stress response with lowered levels of cortisol. Also, it can alter dopamine and serotonin activity making it an excellent form of stress relief.

MSM Is the Multitasking Ingredient Your Body Is Missing…

You Popped a Pimple….Now What?

Doing A Skincare Audit Is Almost As Satisfying As…