Search “jade egg” and the first thing you’ll see is the word “don’t.” Oops, I did it anyway.

For anyone unfamiliar, the jade egg (or yoni egg) is a polished egg-shaped stone worn inside the vagina. Jade is the classic stone used, but they also make them in rose quartz and obsidian. According to lore, it’s a centuries-old practice borrowed from Chinese empresses. But why?

There are some bold, bold claims for jade eggs available online (most of which are widely denounced by medical experts). Jade egg fanatics say it can do anything from increasing your libido, to reducing PMS symptoms, to giving you a more radiant face.

Although I’m skeptical of that level of fandom, I can see how it would be useful for strengthening your pelvic floor (which is something we’re all supposed to be doing more of, right?). 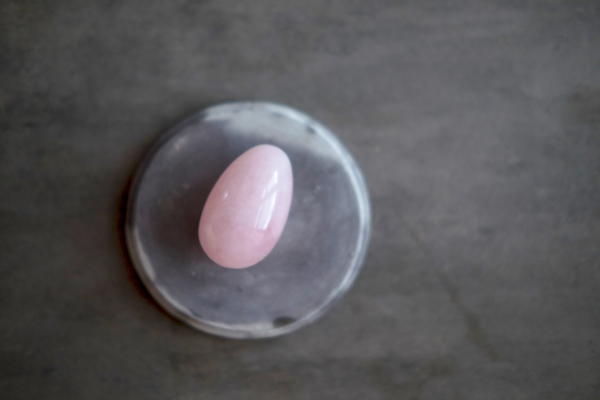 Most gynecologists will give the jade egg a HARD pass. They warn that the porous natural material could harbor bacteria that can cause toxic shock syndrome or bacterial vaginosis.

Holistic gynecologist Dr. Eden Fromberg is actually in favor of them as a way to connect with yourself on a deep, internal level. But still, she has her own caveats. “I’m not a fan of some of the marketing that I’ve seen that pressures women into using them,” she says.

She’s also seen them get stuck. “A woman came to my office with the jade egg in her vagina. She couldn’t get it out for over a week, even with guidance over the phone from the woman who had sold her the egg.” Yikes. “On the other hand,” she says, “the woman didn’t have an infection or require any treatment or antimicrobial therapy whatsoever. So that counters concerns that women will inevitably develop horrific infections from using jade eggs, as is speculated by some doctors in the media.”

Preparing To Use the Jade Egg

Caveats aside, I’m still curious to try it, especially when I overhear one of my yoga teachers raving about the joys of her jade egg practice.

After Dr. Fromberg’s harrowing story above, I make sure to order one that has a small hole drilled through it so you can string the jade egg for easy removal. Then I go to three different stores looking for unwaxed and unflavored dental floss, the recommended material for stringing a jade egg.

I’ve heard of people boiling their egg on the stove to sanitize it before and after each use, but frankly that sounds like a pain. To prep my egg, I wash it with soap first and then boil some water in a kettle and pour it over the egg in a clean bowl. (It’s a bit like making jade egg tea, if you will.) I then wait until it cools to room temperature, remove the egg, and string it with the designated jade-egg floss. 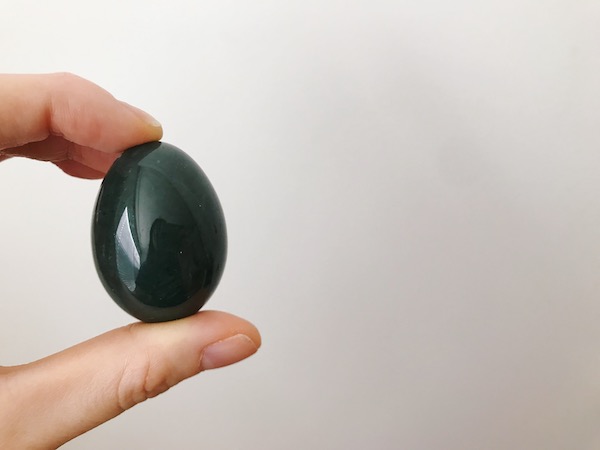 On one blog, the author emphasizes the importance of not forcing your jade egg in. Instead, she describes her vagina simply “sipping” the egg in on its own. Evidently this is an advanced technique though, and I’m not yet willing to invest in the $600 online course that teaches you how to do it. So for now, I take her advice of gently applying pressure to coax the egg in.

Although it’s a bit intimidating, to my great relief, the insertion process is not painful at all. (I’ve had much worse struggles with menstrual cups.)

Funny enough, once it’s in, I can’t really tell it’s there. Like at all.

Still, there’s something amusing about harboring the little egg around. I imagine this is what the goose that laid golden eggs feels like.

Opinions differ on how long to leave the jade egg in for. Some sources say 10 to 15 minutes is sufficient. Others say two to three hours is a good place to start. Even the most fanatical agree that after 12 hours you might want to give it a rest. I leave my jade egg in for almost an hour, blissfully undisturbed by its presence. Then I search for instructions on how to remove it, respectfully.

The online jade egg community insists that one need only squat and push to release the egg. For a moment, I fear I’ll accomplish nothing except maybe accidentally pee. But then sure enough, the egg releases.

Admittedly, I can’t report any long-term effects from regular use over time. Since this experiment, the egg has remained safely nested in its carrying case in my sock drawer. But similar to the experience of wearing the jade egg, there’s something comforting about just knowing it’s there.

Your monthly ally vs PMS*

13 Ways to Winterize Your Beauty Routine

13 Low-Calorie Cocktails to Help You Have Fun and Stay…

The Ultimate Soups to Cozy Up with When You’re Sick

10 Reasons You Feel Bad After Eating, And How to Stop…

Why Does My Gas Smell So Bad? Gastroenterologists…